Posted on October 7, 2013 by thegradmedstudent

Not as cool as my Stethoscope

I was going to write something political tonight, in fact I did write a political thing, but then decided I didn’t really know what I was talking about so I scrapped it.

So, instead I’m going to talk about self-diagnosis and the dangers of Dr Google.

In the search engine terms bit of my stats page I am constantly amazed by the number of times I see lists of symptoms, or most recently (probably because of this post) “Do I have C.Diff?” “Could I have C.Diff?”

The answer to that question is, as you have wi-fi I’m guessing you’re not in hospital.. so no.. probably not. If you’re in a fancy hospital with wi-fi.. ask your doctor, not your computer.

The internet is an exceptionally powerful tool for health professionals to use. I would be a liar if I said I’ve never used it to tell me what a patients signs and symptoms mean, or even to just look up what a medical word means. When it becomes dangerous is when patients take matters into their own hands, believing that they have a disease because of what the internet says and then self medicate, potentially causing more damage than their symptoms. 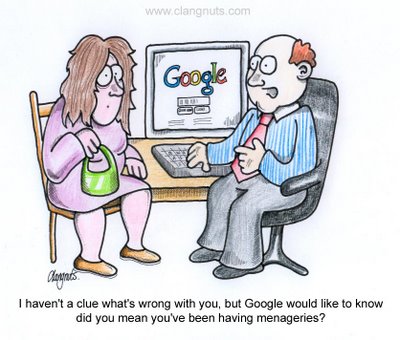 There is a wonderful episode of House where there’s a guy that believes he has Chronic Fatigue Syndrome because he’s tired all the time (makes sense right?) who comes in with a print out of symptoms and things. House, as only he could get away with, gives the bloke a prescription bottle full of sweets. He comes back a week later wanting more because they’ve worked. 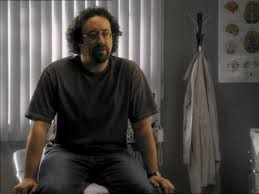 This was the guy!! (I Googled: House Chronic fatigue guy and it came up, unbelievable!

Not really sure how that fit in really..

This all came to me for two reasons. Firstly, my girlfriend made the mistake of Googling (why is my spell check correcting this? Has it not being made into a word yet?) her symptoms. The answers varied, but the most common was Multiple Sclerosis (MS). A terrible diagnosis. Obviously this caused her quite a bit of distress. Personally I didn’t think MS was likely.. I was leaning more towards Shingles. After a visit to her GP (Oh btw, for my American friends.. a GP is a family doctor, I got asked this last week, my bad guys) it turns out that he thinks she has a trapped nerve. I think he’s wrong, but that’s because I am arrogant. I definitely think Google is wrong.

The problem with Google is that it favours diseases like MS and cancer. It favours diseases where the symptoms are non-specific and diverse, covering many different systems. If you Google, “crushing chest pain and shortness of breath” it isn’t going to tell you that you have cancer, it’s going to tell you that you’re having a heart attack and that you need an ambulance. However.. let’s just look at that example. I’m going to put that into Google and screenshot what comes up.

Ok, so Google thinks that you’re having a heart attack. It also thinks you could have angina, aortic dissection or a pulmonary embolism (PE). All of these are potentially fatal. What Google doesn’t ask you that an actual person would not need to is: “Have you just been playing rugby and got tackled hard?” “Have you been playing cricket and taken a ball to the chest” “Are you asthmatic?” “Have you got the flu and been coughing a lot?” All things that aren’t fatal. Google, like the media always seems to bring the most dramatic things to the fore, ignoring the day-to-day boring causes.

That last one has just reminded me of a case I saw in A&E.

A pregnant woman (36 weeks gestation, so nearly ready to pop) came in because she had chest pain. She’d had a cough for a few days. She’d been to see her GP that morning who had reassured her that there was nothing malicious there and that she had probably just pulled a muscle from all the coughing. He did the responsible thing and gave her a leaflet telling her what to do if she coughed up any blood (he was rightly wanting to rule out a PE). The patient wasn’t satisfied. She was convinced that this was something awful. So she sat down at her computer and put her symptoms in. The computer told her she was having a PE. She phoned an ambulance and was brought into A&E where myself and another student clerked her.

A PE is a blockage of blood supply to the lung. For more info see the links I’ve posted.

She wasn’t breathless, she wasn’t cyanotic and her pulse was normal (considering she was in her 3rd trimester). She presented us with a print out from the NHS choices website (This in fact . She also brought this. ). These two documents, to her, were proof that she had a PE and was going to die along with her baby. She said that her anxiety was a symptom. I beg to differ, if I was pregnant and the internet (the fountain of all knowledge) told me I was going to die, I’d be fucking anxious as well.

It turns out, that like her GP suspected she had just pulled a muscle, probably from coughing due to her infection. Maybe this woman is a bad example, because I can see why she would be worried, but the fact is that thousands of people worry themselves senseless because of what they’ve read on the internet.

I wanted to make the point that the worst people in the world for this are medical students. This entire post is massively hypocritical, because in the last year I have diagnosed myself with a PE (wrong), asthma attack (wrong), another PE (wrong again), a stomach ulcer (right), appendicitis (wrong), anaemia (wrong), man flu (correct) and some exotic tropical illness I can’t even remember the name of.

This doesn’t really fit here but I wanted to use it anyway because it’s kinda cool.

Medical students don’t get it from Google though, we get it from our textbooks and our lectures. There’s an interesting post from the New York Times Health section here that describes what is known over here as Medical Student Hypochondriac Syndrome, though it actually goes on to say that it doesn’t exist. My GP is sick of me going to pester him with new illnesses that I think I’ve picked up from patients so he’d probably disagree with their findings.

I should probably wrap this up as I have some work to do before I go to bed.

So, my final thoughts on this:

The internet is an incredibly powerful tool for good, but in the wrong hands it can be used for bad things, so take everything you see with a pinch of salt (except my blog. My blog is Law. I’m joking.) and make sure that you read the entire page. If you’re 21 and a bloke and the page says the menopause.. you’ve got something drastically wrong.