Posted on September 24, 2013 by thegradmedstudent

It’s something you never want to hear, especially as a medical student walking out of the hospital after a long day. But today as I was walking out of the SAU (Surgical Assessment Unit) the shout from a womans voice came from behind a curtain. I looked around to see if anyone else had heard and was responding.. I was the only one there.

“Bollocks.” I breathed to myself. Took a deep breath and remembered that this is what I was here for after all.

I walked, determined passed the other beds in the bay and pulled back a corner of the curtain to see a nurse (she was about 5 foot nothing) trying to lift a rather obese man back into his bed. He was trying to help her, which was a good sign, showing that he was obviously conscious and alert.

I scooted around the bed and helped. I was amazed at how strong the nurse was; I didn’t lift as hard as I could in case I over powered her and the bloke fell on top of her. Maybe I was giving my (lapsed) gym routine a little too much credit as she nearly over-powered me.

After a couple of attempts we managed to get him back into his bed, it was then I noticed that he had quite a nasty looking cut on his elbow, presumably where he’d landed and that it was starting to bleed.

“I’ll go and get someone to come in and help the doctor clean your arm up.” The nurse (I now realised she was only a student nurse) turned and walked out as I tried to protest. I then had the embarrassment of having to explain to the patient that I wasn’t a doctor, that I was just a medical student. I then had to explain to the more senior nurse that because I was only a medical student I couldn’t suture this guys arm back together. This took a couple of goes to get across. “What are you doing on a surgical ward if you’re a medical student?” She then demanded to see my ID to make sure I wasn’t just some random.

I’m not sure if she was being deliberately difficult because my refusal to suture a patient (which I’m not allowed to do, I’ve only ever sutured pigs feet before) meant that she would have to go and bleep a doctor. Or if she was just a bitch. I actually hope it’s that she’s a bitch.

I’m glad that I was able to go in there and help the nurse, as I really think she would have struggled to get him back into bed, as he wasn’t the skinniest bloke I’ve ever seen. But, I really think the more senior nurse was out of line, kicking off like that at me. I would have thought that someone who has obviously been a healthcare professional for a long time would have realised that medical students become doctors. Doctors then have their common sense removed and become surgeons. My official degree title is MBBS (Bachelor of Medicine and Bachelor of Surgery), so technically I could say I was a Surgery student and that probably would have been ok in her books. Either that or she’d have found another reason to have a go at me.

90% of the nurses I’ve met are lovely, they really genuinely care about their patients and like working with the doctors and the HCAs and teaching the medical students. The rest of them are some of the most conceited, bitchy people I’ve ever met who seem to look upon doctors and medical students as inconveniences that try to kill their patients by not responding to bleeps the second they send them. Two nurses were recently severely disciplined in my hospital for repeatedly bleeping a F1 across the hospital on a night shift to fake calls. They should have been sacked. If a patient had died because of their actions I have no doubt that they would have been.

I didn’t want this to be a rant about nurses. I like them, I really do. I’m dressing up as a nurse next week for our annual cross-dressing thing. I just think that some of them (in my experience, the more middle-grade the nurse, the more likely this is to be the case) think that because they are in a caring profession that automatically makes them good people. This is not the case (this applies to doctors, HCAs, carers..everyone). Being a good person makes you a good person. Being a bitch makes you a bitch. Just because you get more hands on with a patient than another member of the MDT does not mean you have the right to treat them, or their trainees with disdain.

I’ve probably overreacted to this, I guess the moral of this story is this: No good deed goes unpunished. If you hear a damsel in distress shouting for help.. walk on, you’ll only get bollocked for helping. 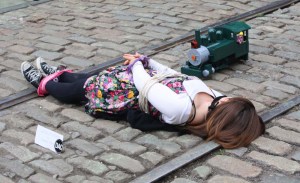 Don’t let her get run over just to avoid a talking to.

Don’t actually do that like, make sure you help. Just smile and think of penguins slapping the shit out of whoever is giving you a talking to.

Just imagine these guys going to town on whoever is shouting at you. It helps.

5 Responses to Week 4- How to piss off a nurse.