Posted on August 29, 2013 by thegradmedstudent

The day started at 7am on the CDU (Not to be confused with the CDC). The CDU as an acronym officially stands for Clinical Decision Unit but is much more commonly referred to as the “Can’t Decide Unit”. The CDU is a product of the 4 hour guideline which requires patients to either be admitted or discharged from A&E within four hours of being triaged. Obviously this requires beds to be free for people to be admitted into, something which is not always the case in a busy hospital, especially during the winter months.  The CDU was therefore created to allow patients that needed to be admitted to be removed from A&E (and therefore not “breach” the 4 hour guideline) but still receive care from A&E staff. It also allows time for decisions to be made about the clinical state of a patient, where a wait and see approach is more appropriate.

There was  only one occupant of CDU; (the sign of a quiet night in A&E) an elderly gentleman in one of the beds who had been brought in from his nursing home after a fall. He had a deep wound on his head which had been stitched and dressed. However that wasn’t what got my attention. The man was stick thin. He was also deaf and mute and according to his notes, severely dehydrated on admission.  All of these things are worrying signs that his care home were not looking after him properly. When his son arrived (he’d had to drive nearly 400 miles) the consultant raised his concerns about his father’s treatment and his son was visibly shocked. I don’t know how long he’d gone without seeing his father, but he said he “didn’t recognise him.” Things like this really worry me. We don’t seem to be able to go a week without another allegation of neglect or abuse in the care system, whether it’s of kids or the elderly. I realise that 99.99% of carers go into their jobs for the same reason that people train to be doctors and nurses; because they want to look after people and improve their lives. It’s that 0.01% that do it because it gives them power that should be locked away. This poor bloke, whether intentionally or not, had been starved and dehydrated to the point where he couldn’t stand up on his own, quite possibly because he was unable to ask for things he was ignored.

I was obviously quite shocked by this, as my consultant took me and the other medic with us for a coffee and explained that things like this were rare but that they had to be followed up on and consequently he would have to spend a lot of time that day talking to social services and the police and therefore we would have to fend for ourselves. This was fine by me as it meant more time in majors. Before 10am I’d seen a case of severe pneumonia, a case of suspected TB and a 18 year old with suspected meningitis.. though sadly I wasn’t allowed to participate in their care as they were very seriously ill. Was probably for the best now I think about it.

I was just finishing a cup of tea (one of the nurses made it  and can I just say- DAYUM that woman can make a fine cup of tea) when a gentleman (I use the word loosely) in his mid thirties was wheeled into the unit and put into bay 6. He’d been in a fight and had a head wound and a few cracked ribs. He also stank of alcohol. My heart sank when the registrar asked me to go and find out what had brought our friend in to the hospital today. I looked around for my other medic, but she was busy with a suspected gallstones case (of which I was very jealous).

I decided that as I was British, I was not going to let a drunken muppet stop me doing my “job”. After all, who hasn’t had some of the most “intelligent” conversations of their lives while inebriated?

I pulled back the curtain and introduced myself

“Hello sir, I’m Oscar, I’m one of the medical students..”

“GET THE F**K OUT!! I’M SLEEPING YOU…” I cut out the rest of this sentence so that my blog doesn’t suddenly become R rated.

I was determined not to be put off.

“Sir, can I just ask you a few questions about what happened to you?”

He seemed to have forgotten his previous outburst and seemed actually quite docile now. He was also looking passed me. I turned around and saw that Dave, one of the staff nurses in A&E, had entered the cubicle with 2 members of the hospital security staff. Dave is 6’4” and built like the proverbial brick shit house. I’m pretty sure he could bend steel with his little finger. The two security blokes weren’t as big as Dave, but they were certainly twice the size of the bloke in the bed. Dave took me out and suggested to the registrar that he go in there and take the history himself. The registrar did it at a run. It’s funny that despite being many pay grades higher, everyone knows that the nurses really run the emergency department. They decide who gets seen when, so if you need to be seen quickly in A&E, get in with one of the nurses. 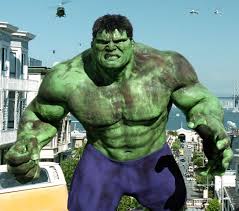 Pretty much what Dave looks like, except less green.

Dave apologised to me for that, but did tell me it was an important lesson to learn. That patients can, and will be dicks to you. I questioned the sanity of a patient who would yell at him like that, and got a knowing look in return.

About an hour later (in which I did very little as there wasn’t much to be done) there was a very funny smell coming from the cubicle containing the drunk guy. It took everyone about 2 seconds to recognise it before about 5 nurses, and two paramedics ran into the cubicle.

The patient was smoking.

Now, you might think that is bad enough, but you would be wrong. The patients O2 sats had been low, so he had been given an oxygen mask (which was flowing at 25%). Which was around his neck. Oxygen is flammable. Pressurised oxygen, like the stuff flowing into that mask is explosive.

Fortunately nothing went bang. I recently watched an episode of Greys Anatomy where a patient did that and wasn’t so lucky. All those images went through my head as the security guards walked into his cubicle, searched him (found another lighter and another packet of fags) and then stood at the corners of his bed while it was decided what would happen to him.

In the end he was discharged a few hours later having being given some IV fluids to sober him up, a waste of money in my opinion. He didn’t get any less abusive throughout his stay, in fact being sober seemed to make him louder, more obnoxious and less patient.

Patients like him are part of working in A&E and while it was a little shocking to get that abuse early on in my medical career, at least I know what to expect from now on. It does just baffle me though, that someone can behave that way towards doctors and nurses that are trying to relieve his pain. I guess that some people really are just ungrateful bastards.