Appendicitis and a rant about fairness

Posted on August 22, 2013 by thegradmedstudent

I haven’t written anything for a while. I have had a lot of work catching up things that I missed with me knee, so sorry about that, though to be honest, not much has happened except that I came off my crutches last week. Which was brilliant, being able to move around properly is good. I’ve been down to using one for the last 2 weeks and started walking confidently around the home without any shortly afterwards. However it seems my luck continues in a downward spiral. I’ll explain.

On Monday we had our final presentations for our community health module. I realise I’ve not told you much about this module. That’s because I think some of the things we’ve come across in it are quite sensitive and I’m still working out a way of discussing patients without leaving any clues as to who they may be. Basically, for this module we have a series of lectures about common sense, that have so far taught me that everyone in the north is going to die at 20 because we’re unhealthy. The north/south divide is very evident in medical statistics. Especially when the lecturer giving them has obviously never been further north than Birmingham and seems to be of the opinion that in the north we have only just discovered the wheel.

Along with the lectures we have a community placement, in an area of our city where we visit the homes of three of our patients and discuss how their health problem has had an effect on their lives. It is designed to get us to think about the patients as a whole person rather than just as someone that needs treatment for a specific illness, and I do think it’s a great idea. We then make a presentation (we’re in groups of 4, Kate is in my group which makes making presentations easy) on what we’ve found and deliver it to our whole section of the year (about 20 people).

This was our final presentation and was in front of a much larger audience, approximately 1/3 of the year and was the one that actually counted towards our final mark in this module. The area of our city that we were assigned to is one of the poorest areas of the country, and the final patient we were visiting was on one of the poorest streets of that area. She was absolutely lovely. A young mother who’s baby had been very ill when he was born and had obviously gone through hell. Having to travel nearly 30 miles every day to see her newborn baby for the first 4 months of his life as the local hospitals don’t have the resources to care for her child. Which, personally I think is scandalous as we have one of the largest, best funded hospitals in the country within the trust and a stones throw from this girls (I’ll call her Hannah, not her real name) house. What is even more disgraceful was that because she did not live within the area of the hospital that her son was now in, she did not qualify for an overnight room, so.. with no job (because she had to be by her sons bedside every day) she had to pay £30 to get 2 buses and a train to see her son. Unbelievable.

Anyway, sorry I was ranting.

We did our presentation on Hannah and her son and got very good feedback and marks. Although one woman in the audience (she’s on our course) picked us up on a really, really small mistake on one of the slides that I’d made. This was after I’d asked her a really nice question during her presentation. I think someone was getting competetive…

On the morning of the presentation I woke up feeling rotten. My stomach was off, really bad cramping pain in my abdomen, so I took a good chunk of painkillers that I had left over from my knee. Nothing touched it. So I took some more. Essentially I was stoned on codeine when I was giving our presentation and no-one noticed. By the evening I was in a lot of pain and the pain had moved to my right iliac fossa (lower right 1/9th of your abdomen, just inside your hip bones – picture below) and I had a fever. I went to my GPs office which is just at the end of my road fortunately and begged the receptionist to see a doctor (as it was 5.20pm and they were closing up). One doctor was walking out and agreed to have a look at me as I was obviously in pain, took 2 minutes taking a history, 30 seconds examining me and sent me to A&E with appendicitis. I would like to point out that in the morning I said. “I bet this is appendicitis.” I’ve never been more pissed off to be right. 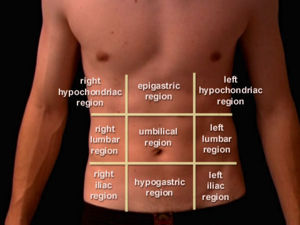 This meant a 4 and a half hour (3 hours 59 minutes if David Cameron is asking)  wait in A&E for a bed to open up on the surgical ward. When I was eventually admitted I was seen very quickly by a surgical doc who said they wouldn’t be cutting me open at 3am. This was fine by me. After an X ray, I was given some morphine (I hate the stuff), some anti inflammatory drugs and some antibiotics as well as some laxatives (as morphine tends to clog you up a bit).

In the morning on the ward round, I was examined and told to wait and see as I looked a lot better.

My phone had ran out of battery, so obviously my mother, Alex and my housemates were all worrying because I hadn’t got in touch. They all managed to ring the ward within 5 minutes of each other. I think this pissed the nurses off a little bit, though it did make me feel like a bit of a celebrity.

By 5pm I was ready to go home. I was still in pain but I’d been told that my appendix wasn’t inflammed (Ultrasound.. apparantly) so I knew that I didn’t need surgery. I also knew that the nurses were scrambling around trying to free up beds as there was a large queue in A&E and people were starting to “breach”. I told the junior doctor on the ward that I didn’t need to be there and that I was wasting a bed. She knew I was a medic (not that I’d only had 9 weeks of training though) and agreed to get the Registrar to see me.

To cut a long story short, I was discharged with a shed load of painkillers, anti-inflammatory drugs and some laxatives to combat the painkillers.

No idea what was wrong. I still feel a bit ropey. At least I can monitor myself and if anything goes wrong I can go straight back.

I really think that this episode helped me a lot in the next semester when I started seeing patients myself. I knew what it was like to be scared, alone and surrounded by doctors asking me intimidating questions. I think a lot of doctors and medical students forget what it’s like for the pateints sometimes. I’m not advocating hospitalising yourself to find out, but I think we do need to remember the patient is a person, not just a disease.